David Hussey: ‘IPL is still the best T20 competition in the world’

David Hussey was the original T20 specialist when the Indian Premier League kicked off in 2008. Kolkata Knight Riders paid $625,000 in the auction to bring the Aussie on board and Hussey emerged as a key player for the Knights, playing seven seasons for the team. He continues to be associated with the Knight Riders.

Hussey admits that with improved technology, the T20 game, too, has evolved over the years.

Hussey, now the head of men’s cricket at Cricket Victoria, shares his thoughts with  Sportstar about the changes in T20 cricket, the road ahead and more…

Q When T20 cricket came in, you were considered among the specialists in the format. How do you assess the evolution of T20 cricket?

So, the best way I could describe it is that the game has evolved over a period of time because the technologies have improved. The bowlers have got better in executing all their skills. You do a lot of planning and preparation on what batters can and can’t do.

Whereas back in 2006-2007, when the IPL started in 2008, we would just be trying to execute yorkers rather than bowl slow-ball bouncers, wide yorkers or length ball, everything has really improved.

The planning, the preparation has improved because every ball is important. But from a batting point of view, you are playing on smaller grounds as well. So, if you hit a six, the old school thinking was that you try and get a single and get off strike. So, seven off two balls.

But the new school of thinking is to try and hit another six, follow it up by another six and then another and get 20 to 25 runs off the over, which breaks the back of an opposition.

The fielding has improved immensely. Some of the fielding that the players do today is phenomenal. It’s out of this world. So, athletics has helped.

Q Over the years, with so many tournaments played throughout the year, the competition is immense. What are the key skills that today’s T20 players should have?

What I look for is a three-dimensional player, who can bat, bowl and field, so that they can contribute to the team in all three disciplines of the game.

If you are a wicketkeeper, you must bat and dominate.

In terms of stats, it’s all about strike rate with the bat. And then with the ball, it’s average and the strike rate combined. You get around between 25 and 30.

I think (Jasprit) Bumrah’s stats is about 22-23 and that’s why he is arguably the best T20 bowler in the world. He’s being missed at the moment by India in the T20 World Cup.

For franchisees it’s also about networking and asking players and people all around the world about different players and their skill sets and their strengths and weaknesses. So, it’s quite a big business and I know at Kolkata (Kolkata Knight Riders), we use A.R. Srikkanth and I believe he’s one of the best stats-man and the best player evaluators in the world.

Q You have been associated with the IPL since its start in 2008 in different capacities. What are your thoughts on the local Indian players that have emerged over the years?

Since 2008, when the IPL started, the change in the local domestic Indian players has been paramount. They’re a lot fitter, a lot stronger and they go to the gym all the time.

The areas where they hit when they bat are just all over the ground. It’s 360 degrees, their placement is phenomenal. They hit reverse sweeps now and can hit quick sixes. I’ll put that down to sitting with some of the best T20 players in the world like AB de Villiers. When they are part of your team, you can sit down and have a conversation about how to play in certain situations and what to do to improve their games.

I think that’s the best thing about the IPL – the influx of the international players into a domestic Indian tournament, where everybody gains.

And, as you can see, the bowlers are bowling a lot faster. They are a lot stronger, and they are executing their skills a lot better. And their planning and preparation for games is just incredible.

For example, you see, Umesh Yadav is still one of the dominant T20 bowlers in the world with the new ball. At his age, it’s a great story. Hope he keeps continuing because the IPL is one of the best tournaments in the world.

Q When the T20 format began, many thought it was a slam-bang cricket, where you had to hit sixes and fours right from the right. But over the years, it seems like players have realised that it’s also about settling in and pace the innings according to the situation…

From a batting point of view, we have sort of come almost 180 degrees. At the start, it was more entertaining. You hit a four or a six and then get one off the next ball and then try to get about 10 or 12 runs per over, rather than now, where you want to attack a bowler and hit him for three or four back-to-back sixes. India defeated Pakistan at the MCG last Sunday. Virat Kohli took his time and paced the innings perfectly and cashed in at the end. Suddenly, they needed 15 or 16 off the last over and they did that in the last ball. So, it was really an old-school T20 run chase. That was a new ball pitch where they took their time and held their wickets. And then attacked a few spin-bowling options and the last over was a complete performance by the Indian team.

Q Do you think this ‘pacing out the innings’ approach is the way to go?

Look, it changes from team to team. So, at Kolkata Knight Riders, we encourage players to go out there and see the ball. If you feel that you can clear it, then go for it. Whereas some of the old school thinking is that you should take your time and get a feel of the pitch. So, it depends on which player you are. Somebody like AB de Villiers can come out from ball one and hit it all over the park, but also, there are times, when you need to take some time and get used to the conditions. There are no exact signs, and that’s the best thing about T20 cricket. It is very unpredictable. 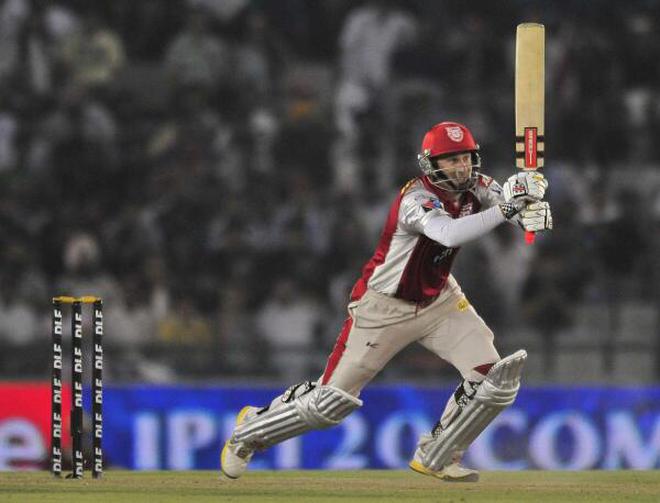 David Hussey averaged 26.98 at a strike rate of 122.98 in 64 matches in the IPL. He played for Kolkata Knight Riders, Kings XI Punjab and Chennai Super Kings.
| Photo Credit: PTI

Q Playing in Australia is always difficult. The boundary sizes are different from one venue to another, the surfaces are different. How challenging is it to for a batter to tackle such varying conditions?

Conditions… huge! You spend a lot of time preparing teams to play based on the conditions of the pitch and the size of the boundaries, the wind conditions, the dew. In Australia, the pitches are different to the ones that you have in India. They are pacy, bounce more and probably swing a little bit more than in Indian conditions. They probably don’t turn like in Indian conditions.

Talking about boundary sizes, being a batter, as you look around you think, “Oh, can I actually hit it that way?” So, you’re already thinking in the negative frame of mind rather than thinking, “yup, I can clear that ball. If I can get the ball in my area, then I’m going to go for it…”

But the way the players are hitting the ball these days, it doesn’t matter how big the boundaries are because the ball generally goes 20 to 30 rows back.

Q In franchise cricket, the competition is increasing with the advent of newer leagues. Several players are contemplating to focus on just T20 franchise cricket. How do you assess this situation?

It’s really a tough one to answer because everything is on a case-by-case basis.  But in my mind, the IPL is still paramount. It’s still the best T20 competition in the world. So, any aspiring athlete or any aspiring cricketer wants to play in that tournament and would like to play in that tournament for as long as they possibly can because it is the biggest and the best.

As far as the other little leagues floating around, I think you’d probably have to work out your schedule and try and figure out what’s best for you in preparation for trying to get into the IPL.

Q Do you think that the BCCI should allow Indian players – the ones who are not part of any IPL franchise – to play in overseas leagues?

Well, it’s a tough one because the BCCI wants to protect the IPL and keep it as the biggest and the best T20 tournament in the world. As a cricket lover, you want to play all over the world and feature in as many tournaments as you possibly can – if you can’t play international cricket that is. But, I fully understand where the BCCI is coming from.