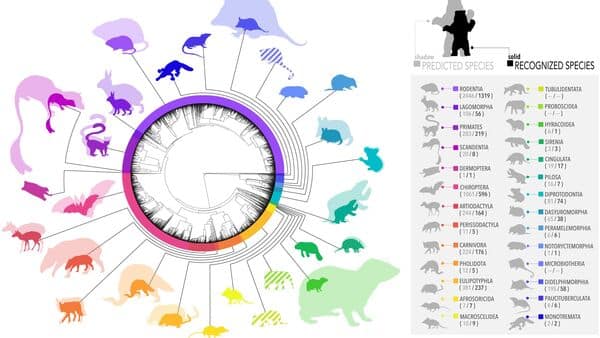 A recent study claimed that there are likely hundreds of mammal species that have not yet been named and are hidden in plain sight all around the globe. The majority of these hidden mammals have small bodies like bats, mice, shrews, and moles according to researchers.

According to study co-author and professor of evolution, ecology, and organismal biology at The Ohio State University Bryan Carstens, most of these unidentified mammals are small and resemble well-known animals so closely that biologists have not been able to identify them as a different species. This has prevented scientists from discovering these mammals’ existence.

“You can’t tell they are different species unless you do a genetic analysis,” the researcher added.

The study by the title, “Analysis of biodiversity data suggests that mammal species are hidden in predictable places” was published on 28 March 28, 2022 in the Proceedings of the National Academy of Sciences (PNAS).

The team, led by Danielle Parsons from Ohio State, used supercomputer and machine-learning techniques to examine millions of publicly available gene sequences from 4,310 different mammal species, along with information on the locations of the animals, their environments, their life histories, and other pertinent details.

As a result, they were able to create a predictive model to determine which taxa of mammals are most likely to include hidden species.

“Based on our analysis, a conservative estimate would be that there are hundreds of species of mammals worldwide that have yet to be identified,” Carstens said.

That finding, in itself, would not be surprising to biologists, he said. Only an estimated 1 to 10% of Earth’s species have been formally described by researchers.

“What we did that was new was predict where these new species are most likely to be found,” Carstens said.

The findings indicated that unidentified species are most frequently found in families of small-bodied animals, including bats and rodents.

It is also likely that many of the hidden species will be found in tropical rain forests, which is not surprising given that most mammal species are found there.

Carstens asserted that numerous unnamed species are also probably present in the United States. His laboratory has named a few of them. For instance, a paper by Carstens and his former graduate student Ariadna Morales from 2018 demonstrated that the little brown bat, which is widespread throughout North America, actually comprises five different species.

That study also highlighted a crucial aspect of why it’s crucial to recognise new species. One of the recently discovered bat species had a very small home range that was restricted to the area surrounding the Great Basin in Nevada, making its protection even more important.

“That knowledge is important to people who are doing conservation work. We can’t protect a species if we don’t know that it exists. As soon as we name something as a species, that matters in a lot of legal and other ways,” Carstens said.

Carstens calculates that somewhere close to 80% of the mammal species in the world have been identified based on the findings of this study.

When compared to beetles, ants, or other kinds of animals, mammals are shockingly well described, he said. “We know a lot more about mammals than many other animals because they tend to be larger and are more closely related to humans, which makes them more interesting to us.”